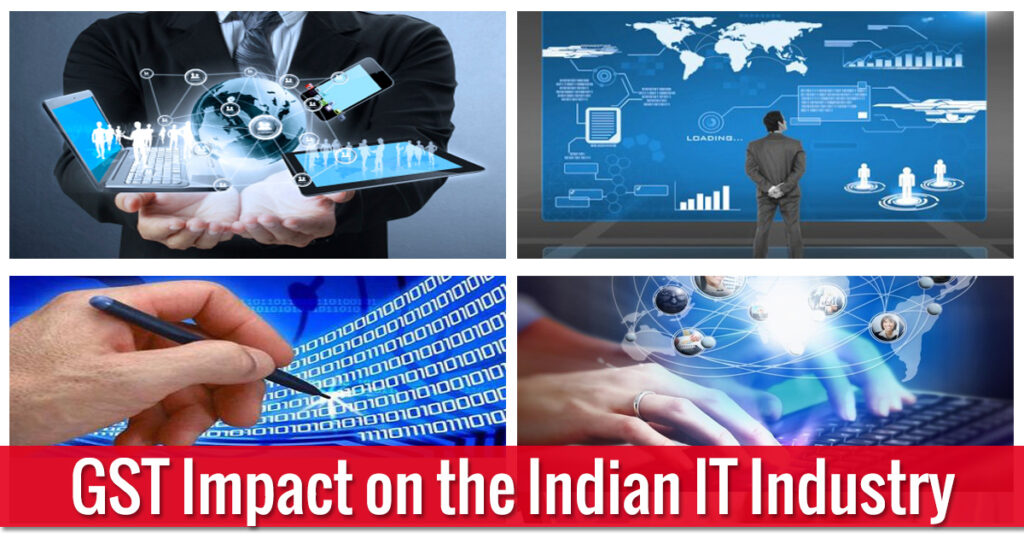 Role of GST in Indian IT Industry 2017

The recent goods and services tax launched by the government has affected all parts of small and big sized business industry in the country. The IT industry of the country is facing its implications. India is a hub of various IT revolutions and developments. There is a huge number of small, medium and big size IT companies that contribute to the country’s GDP. The association of information technology and the indian economy are well aware of all the upcoming changes that would come along with the implementation of GST.

Apparently, GST has made the indian tax system easy by eliminating the multiple types of indirect taxes and imposing a single tax system.

Initially, the IT service providers use to pay taxes which were collected from a single location through the company head. However, under GST a new provision has been introduced named “Place of Supply” wherein all the billing and invoices will be raised in the case of single contract services where the delivery happens from the offices based on multiple locations for the same activity. This creates a need for all IT companies to register themselves with all those stares where their customer and clients are based.

There used to be three tax points, which were central GST, inter-state GST, and state GST. The process of GST filing used to be complicated, there were almost 111 taxation points which were required to be filled. With the implementation of this new GST, the process of crossing multiple tax points have been simplified under a single tax window.

The GST implementation has also affected the price of the goods & services. Consequently, the tax rates on IT services and products have also experienced a hike in the price. However instead of paying multiple taxes in the form of service tax, VAT and excise duty which used to be levied on the purchase of the IT products & services; now only single GST tax will be paid which is almost equivalent to the same amount.

The IT industry’s biggest client is the E-commerce business which also faces a major implication with the change in the taxation policy. According to the new GST provision, each seller is required to register itself and file the returns so that they can claim the credits on the TCS paid because the tax will be deducted from the collection source itself and it will be deposited directly to the government. This might have a negative effect on the sellers who may not want to sell their product through an online platform which will result in the hampering of the industry growth.