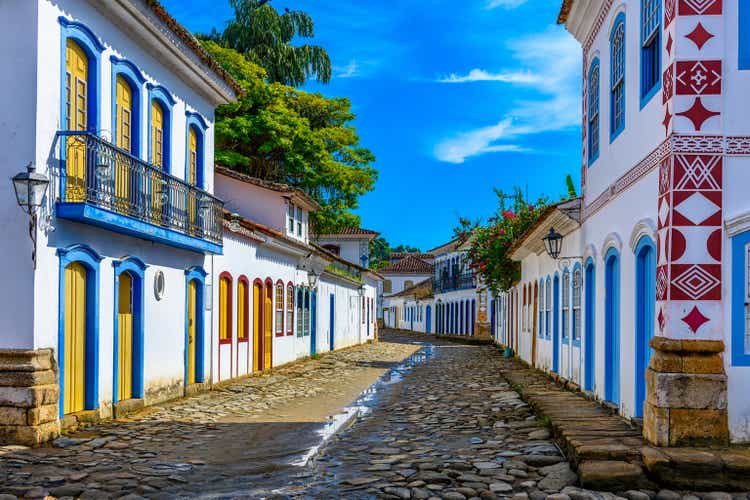 ILF is a fairly large ETF by assets: the fund had $1.14 billion in assets under management as of July 1, 2022. This follows net outflows over the past year of circa -$135 million as illustrated below.

The U.S. dollar has appreciated recently, as have U.S. rates. This typically puts pressure on economies that borrow in U.S. dollars, especially emerging markets. ILF, given its country exposures, is an emerging markets equity fund as much as it is a “Latin America” equity fund. It is concentrated in Latin America, but the same region (and thus ILF’s portfolio) is comprised of emerging markets. That means ILF is likely to hold a fairly high cost of equity in USD terms, given the country risk premiums usually included in discount rates for riskier economies.

The “beta” of ILF is apparently circa 1.65x on a five-year basis, and per iShares, circa 1.37x on a three-year basis. These two readings are quite disparate, but clearly ILF is being priced in accord with a higher underlying level of risk. That makes sense. At the moment, Professor Damodaran estimates the mature market equity risk premium as 5.73% (as of July 1, 2022). While local risk-free rates are different in Latin America as compared to the United States (the other major component of the cost of equity), Damodaran further estimates the country risk premiums for Brazil, Mexico and Chile as being 2.97%, 1.58% and 0.70%, respectively.

The actual country risk premiums assigned to Latin American countries, implicitly by the market, are variable. But if you divide 2.97% into the current mature market ERP of 5.73%, and also the lower figure of the above of 0.70% (Chile’s country risk premium), you get 0.52 and 0.12, respectively. These are somewhat arbitrary numbers, but essentially the implication is that the suggested beta for ILF is somewhere in the region of 1.12x and 1.52x (likely closer to 1.52x given Brazil’s heavier weighting in the ILF portfolio). As the Yahoo! Finance figure for ILF’s five-year beta is even higher at 1.65x, I think generally speaking scaling our ERP up by 1.5x is fair.

For some basic financial figures, I would defer to ILF’s benchmark index factsheet as of June 30, 2022, provided by S&P Dow Jones Indices. The trailing and forward price/earnings ratios for the index were 6.65x and 7.04x, respectively, while the price/book ratio was 1.74x. The indicative dividend yield was 8.11%. The implied forward return on equity was, therefore, 24.7%, with a dividend distribution rate of about 50%.

We can use these figures as a base, but interestingly, the forward price/earnings ratio is higher than the trailing, indicating a year-one fall in earnings. Meanwhile, Morningstar’s estimate for three- to five-year average earnings growth is currently 11.97%. Inflation is currently elevated in these economies, even the core inflation rates, although over the past 10 years, the average has been circa 4-5% for Brazil, Mexico, and Chile. A reversion to mean, and perhaps conservatively assuming little “real” earnings growth, would lead me to want to err on the side of caution and assume a fairly stable rate of earnings growth after the year-one dip. I will assume a trailing off of the return on equity down to about 20%, keeping dividend rates high. My three- to five-year average earnings growth rate is therefore lower at 2.54-3.77%.

My IRR gauge on a total underlying earnings power basis, is circa 20.45%, while valuing dividends only would take us to circa 13.82% assuming no buybacks in both cases.

That also assumes a stable forward price/earnings multiple. The current multiple is about 7.04x; a forward earnings yield of 14.2%. This is quite low by the standards of mature markets. Over the long run, this could potentially expand if local inflation (and risk-free rates) ease. However, dividing 1 over our previous notional cost of equity of 16.75% would give us 5.97x. Netting out an earnings growth rate of say, 2%, you would get 6.78x, or 5% earnings growth (to perpetuity), 8.51x. It makes sense that long-term earnings growth will settle back down to something like 2% (akin to mature markets at the moment), but the current multiple is factoring in higher average earnings growth more proximately. This all makes sense, and so I would prefer not to assume any earnings multiple contraction or expansion.

Based on the IRR gauge, I think ILF is probably within the bounds of fair value, and further that forward returns are likely to be quite high. Any inflation-adjusted earnings growth would boost our IRR too (my model assumes very little in the way of real growth).

FX is another risk factor. Based on The Economist’s Big Mac Index, Brazil’s currency is 22.9% overvalued, Mexico’s 6.5 undervalued, and Chile’s 3.2% overvalued. There is a negative skew here for ILF investors. Brazil does at least have a high nominal risk-free rate, so risk-on carry trades are likely going to be favorable (provided risk sentiment turns more positively in the medium term). But Brazil being ILF’s largest geographical exposure, a potentially overvalued currency is not a great sign.

On the other hand, Brazil’s current account has started to pop into positive territory in recent years at a greater frequency.

That would indicate a potentially undervalued currency, relative to history anyway, since a stronger current account is an indication that a country’s currency is cheap (making exports cheaper and imports more expensive). So, if USD/BRL were to strengthen to levels closer to even the weakest levels of the period 2000 to circa 2010, you could see a drop in USD/BRL of more than 25% at a minimum over the longer run. However, PPP models such as the Big Mac Index would suggest that any weakness in USD/BRL would be arrested by local differing purchasing powers in the present.

So, on the FX front you have a few key conflicting factors, and therefore I imagine the exchange rate is likely to remain in conflict (volatile) over the medium term for now. There probably is not too much risk here for long-term investors. However, the current account could certainly explode higher than present levels, while global risk aversion could keep investors away from long-BRL carry trades. I would suggest there is probably a mild-to-moderate negative skewness in potential outcomes here (i.e., more potential for USD/BRL upside than downside, which is negative for ILF investors given the portfolio’s heavy exposure to ultimately BRL-denominated assets, even if ILF shares are denominated in U.S. dollars).

Still, if earnings come rolling in at reasonable rates, even with some further FX depreciation, ILF could do fairly well. I would expect a positive IRR of over 10% per year. While risk sentiment is currently poor, over the long run, I think ILF investors should do reasonably well from present prices. However, one’s holding period would likely need to be over a year.