During last week’s trading, the price of the EUR/USD declined to trade around the support 0.9950, which is the lowest level in 20 years. And closed the week’s trading around the 1.0085 level, the euro pairs have an important date this week, as the European Central Bank will announce raising interest rates for the first time in 11 years. The bank’s hints about upcoming hikes will determine the euro’s gains following the announcement, along with hints from ECB Governor Lagarde.

In the EU, the German PPI for June beat both expectations (monthly) and (annualized) at -0.3% and 20.4% respectively with readings of 0.1% and 21.2%. Prior to that, it was announced that the European seasonally adjusted industrial production for the month of May outperformed expectations (MoM) at 0.3% with a change of 0.8%. The equivalent (y/y) also outperformed 0.3% with a change of 1.6%.

On the political front, that may affect the euro as well. Italian Prime Minister Mario Draghi submitted his resignation after populist coalition partner Five Star withdrew his support in a vote of confidence, a move that sent ripples in the bond and forex markets. 5 Star was frustrated by what they say is Draghi’s unwillingness to provide more financial support to Italians struggling with the rising cost of living.

Interacting with this, analysis from ING says that the announcement may have helped push the euro against the dollar lower on Thursday, as it recorded as low as 0.9952. However, the subsequent recovery of the euro indicates that the market is not yet too concerned about the political uncertainty. Indeed, Italian political uncertainty of this kind is relatively common and for the most part the Euro is not alarmed. But, this crisis comes at a time when the financial landscape of the eurozone is changing dramatically as the European Central Bank (ECB) looks to undo its unlimited support for the bloc, something Draghi himself did when he was ECB president.

Italian political uncertainty inevitably led investors to demand a higher premium for holding debt issued by the Italian government with the 10-year bond yield rising 5.6% on the day. This contrasts with the consistent performance of German revenue; And it is this difference in the debt constraints imposed on the various Eurozone countries that the ECB has at all times been desperate to avoid. The European Central Bank usually buys Italian bonds to suppress the yield, but this becomes difficult when you are trying to get out of the bond market space and raise interest rates to beat inflation.

Analysts add that without a stable government and a pledge to abide by some kind of condition, the European Central Bank could hardly justify buying more Italian bonds.

I expect the price of the EUR/USD to remain in a limited range until the European Central Bank’s announcement. In the near term and according to the performance on the hourly chart, it appears that the EUR/USD is trading within an ascending channel formation. This indicates a significant short-term bullish momentum in market sentiment. Therefore, the bears will look to pounce on a potential pullback at around 1.0044 support or lower at 1.0009 support. On the other hand, the bulls will look to pounce on further gains at 1.0110 or higher at 1.0145.

In the long term and according to the performance on the daily chart, it appears that the EUR/USD is trading within the formation of a sharp descending channel. This indicates a significant long-term bearish momentum in market sentiment. Therefore, the bears will look to maintain control of the currency pair by targeting profits at around the 0.9954 support or lower at the 0.9805 support. On the other hand, the bulls will target long-term profits at around 1.0196 or higher at 1.0351. 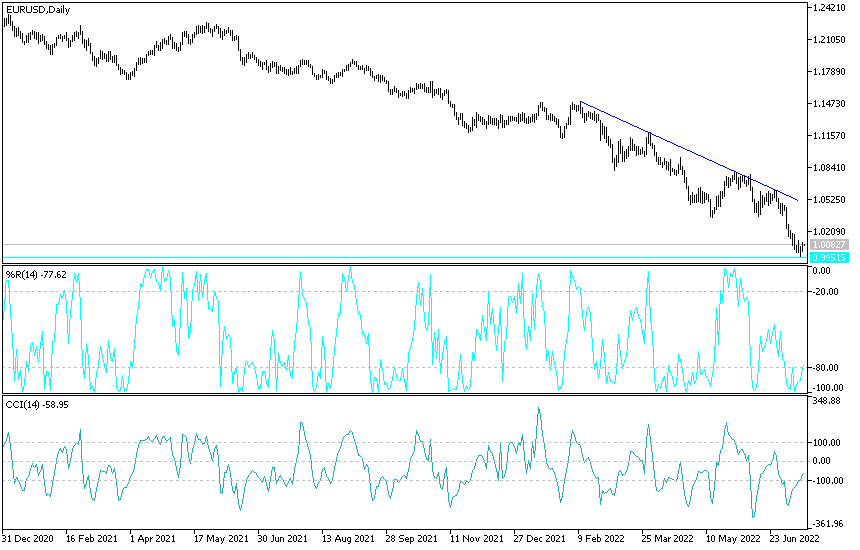 Ready to trade our daily Forex analysis? We’ve made a list of the best brokers to trade Forex worth using.