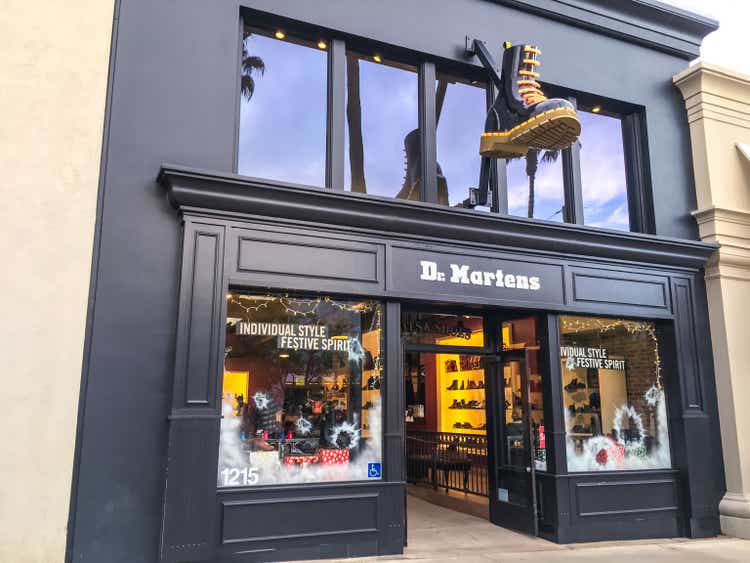 Dr. Martens plc (OTCPK:DOCMF) (LSE:DOCS) is a British footwear company, founded in 1960. Its most well-known product, the 1460 AirWair boot, was honored as a British cultural icon in 2006, alongside the Aston Martin DB5, Concorde and Jaguar E-Type, to name a few.

The company only went public in January 2021, and the stock is down by about 50% from its post-IPO record. At current prices below 270 pence a share, I think it is undervalued by at least 40%. Solid financials, growth prospects and brand-protective management make Dr. Martens a good investment and potentially a long-term compounder.

Dr. Martens throughout the years

Klaus Martens, a German doctor during the Second World War, injured his ankle in a ski accident in 1945. He then found his standard army boots too uncomfortable on his injured foot, which prompted him to make improvements. He added softer leather and air-cushioned soles. These improvements resulted in what would later become 1460 AirWair boot icon.

Dr. Martens boots initially found popularity with housewives and women above 40, who found them very comfortable. Later, both British policemen and skinheads started wearing them, albeit for different reasons. What really made the brand iconic, however, was its popularity among musicians and celebrities.

From punk through rock and grunge to whatever Miley Cyrus is, Dr. Martens’ original boots have always been able to find a devout fan base. The company has somewhat of a cult following among the rebels of all ages and nationalities. A quick Google search results in images of dozens of celebrities, from Avril Lavigne, Gwen Stefani and Orlando Bloom to Jessica Alba and even the Kardashians wearing Dr. Martens. Apparently, the boot suits more than one clothing style or personality type. More importantly, famous people wear Dr. Martens because they like it, not because the company pays them to. This shows just how strong the brand is, giving the company great pricing power, which in turn leads to high profit margins.

Despite its history of success and recognition, however, Dr. Martens has had its fair share of troubles, as well. For instance, sales fell by nearly 70% between 1999 and 2006 as a result of brand mismanagement. R. Griggs Group, the company which bought the patent rights for the boots back in 1959, came close to bankruptcy in 2003 and was forced to lay off over 1000 people and move its production from the UK to China and Thailand to cut costs in order to survive.

But survive it did. By 2012, R Griggs was the eighth fastest-growing British company. In 2013, it was acquired by private equity Permira for £300 million. Permira did a great job owning Dr. Martens as sales kept growing rapidly over the following eight years. Revenue nearly doubled between 2018 and 2020 alone, climbing from £349 to £672 million.

Despite supply-chain difficulties and Covid-19 restrictions, sales grew another 15% to £773 million in the fiscal year ended March 31, 2021. This brings us to today and the reason why I believe Dr. Martens’ future is just as bright as the better part of its past.

Dr. Martens published its annual results for the fiscal year ended March 31, 2022, on June 1st. The company sold over 14.1 million pairs last year, up from 12.7 million the year before. Revenue was up 18% to £908 million, free cash flow came close to £150 million and EPS stood at 18.1 pence a share. The net profit margin and FCF margin were 20% and 16.4%, respectively. These results would’ve been even better in constant currency, with revenue climbing by 22%. Importantly, excessive leverage isn’t the engine fueling Dr. Martens’ growth as net debt was just £53 million at fiscal year-end.

Looking forward, analysts expect fiscal 2023 sales to exceed £1.05 billion and result in 19 pence a share in profits. I view these estimates as overly conservative as they called for 15.5p in EPS for 2022, missing the actual result by 2.6p a share or 16.7%. Given Dr. Martens’ growth profile, I expect EPS to approach and perhaps exceed 21p this year. With the stock currently at 260p, this translates into a forward P/E below 12.5. For a 20% grower, this is dirt cheap valuation.

My discounted cash flow calculations also suggest the stock is undervalued. Using EPS of 20p as the base, 10% discount rate, 13% growth rate for the first ten years and 4% terminal growth rate for the years 11-20 results in fair value for Dr. Martens of about 430 pence a share. This translates into a ~40% margin of safety, which is more than enough for such a high-quality business. Looking at it from another angle, a realistic EPS number of 27p in fiscal 2025 and a more decent P/E of 20 make Dr. Martens a double at 540p in three years’ time.

In fact, given management’s ambitions for both geographic and direct-to-consumer expansion, I might as well be undervaluing the company. DTC, both in-store and online, is the first pillar in the company’s “DOCS” strategy. The other three letters stand for Organizational and Operational excellence, Consumer Connection and Support brand expansion with B2B.

By cutting the middleman, Dr. Martins has been able to increase EBITDA margins from 17% to 29% and better control its brand image. While the company has no intention of going 100% DTC, it does plan to keep increasing the DTC channel as a percentage of sales to at least 60% from the current 49%. This means profit margins have more room to expand from here, so earnings are likely to rise faster than sales for at least another two or three years. That is, despite the company’s decision to increase its marketing spent by 0.5 pts of revenue per annum, also expected to drive sales growth.

I see Dr. Martens’ brand as its biggest and most important asset. Without it, this is just a company selling boots for the winter. The 2000-2006 period already demonstrated the amount of damage brand mismanagement can do to this business. The good news is current management is fully aware of its responsibility to preserve the brand. People at the helm are experienced veterans, who never miss a chance to call themselves “custodians of the brand.” The executive team has a combined 60+ years of experience at other brand-sensitive companies like Levi Strauss (LEVI), Lacoste, and Nike (NKE), to name a few.

Another risk that has only been made more obvious by China’s zero-Covid-19 policy and resulting lockdowns is locating manufacturing in a single country. Dr. Martens dealt with this risk through diversification. In addition to its own factory in the UK, the company also relies on manufacturers in Vietnam, Laos, Bangladesh and Thailand. China accounts for just 10% of production.

But the risk I was initially worried about the most was that Dr. Martens’ boots are still more or less a fashion item, subject to consumers’ changing moods and tastes. In this respect, I was pleasantly surprised to find out that the three original models still account for more than half of revenue. Imagine that, a product that has barely changed since the 1960s is still a top seller in 2022. How many companies can say that?

With that in mind, I am much less worried about Dr. Martens going out of style. Besides, company research shows the brand has never been more popular. This high popularity, however, doesn’t mean there is a risk of market saturation. The company only operates in about 60 countries and is selling just over 30 pairs per 1000 people in its native and most saturated market – the UK. There is plenty of room to grow globally. On page 41 of Dr. Martens’ prospectus, management’s theoretical projections point to the possibility for £6 billion in annual sales in the long term. But the key word here is “theoretical” and there is no need to put much faith in that number yet.

With its intentions to increase the marketing budget, broaden geographical reach and strengthen its DTC channel, all while preserving its valuable brand, I believe Dr. Martens’ prospects are brighter than ever. At less than 12.5 forward earnings, the stock looks undervalued by at least 40%. Given its timeless product, cult following, history of profitable growth and competent management, I believe the stock can rise far beyond my current fair value estimate in the long run.