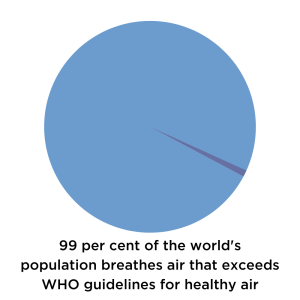 It can feel cliched to talk about win-win solutions these days, but air pollution genuinely merits the label. It stands out for the breadth of problems it contributes to and could help solve with fresh thinking and funding. Yet perversely, it is just as notable for how little money we currently spend trying to prevent it.

Most obviously, outdoor air pollution is a universal problem. Ninety-nine per cent of the world’s population breathes air that exceeds World Health Organisation guidelines for healthy air, and approximately 4.5 million die every year as a result. Many millions more suffer from diseases caused or exacerbated by air pollution that significantly hamper their quality of life.

This alone should be reason to prioritise it, but there are many others. Because both air pollution and climate change are mainly caused by burning fossil fuels, they can be tackled together. Toxic air disproportionately affects the most vulnerable, so addressing it will also help reduce inequality. And because it massively decreases workforce productivity, initiatives which reduce air pollution can also boost sustainable economic development. For funders looking to deliver multiple impacts at scale, it’s the kind of silver bullet that doesn’t often come along.

So why is it overlooked? The Clean Air Fund’s new research shows that from 2015-21 governments gave less than 1 per cent of their aid budgets to projects tackling outdoor air pollution around the world. Meanwhile philanthropic foundations spent just $63.8 million in 2021 – a significant increase on the year before but still less than 0.1 per cent of total global philanthropic spending. There is no sound financial, political, or humanitarian argument for this underinvestment – we should urgently and significantly increase direct funding to tackle air pollution.

We need to break out of our siloes and look for overlaps with other funding priorities. For example, factoring in the health, social and economic benefits of cleaner air strengthens the case for many climate solutions and vice versa. As things stand, just 2 per cent of international public climate finance explicitly tackles air pollution. We can secure significant quick wins if we join forces across issue areas and design projects that work for health, climate and economies. Doing this fairly and effectively needs to be a central part of the debate at COP27 in Egypt this year.

Clearly, this intersects with another pressing and topical debate – how to develop a clean and resilient global energy supply. The war in Ukraine and energy crisis globally has shone a harsh light on the fragility of our current system, further highlighting that funding, technology, research and policies to diversify global energy production are badly needed. The answer cannot be more fossil fuels. We need a pivot towards a clean, affordable, reliable and healthy energy system that works for all.

This shift can be the engine for growth in the world’s emerging economies, but we are not there yet. Globally, the $11 billion (around $1.5 billion per year) committed by development funders to projects that work to improve outdoor air quality is less than a quarter of the $46.6 billion committed to projects that prolonged the use of fossil fuels. This perverse mismatch is widest in some of the neediest regions. For example, despite air pollution being the continent’s second largest killer after HIV/AIDs, governments spent 36 times more aid on prolonging fossil fuel use across Africa than tackling air pollution from 2015-21.

This seems a clear example of what UN Secretary General Antonio Gutierrez calls the ‘moral and economic madness’ of investing in new fossil fuel production and power plants in an era of climate change. Rather than doubling down on fossil fuels, more investment is urgently needed into the alternative solutions which will save lives, unlock sustainable development and turbo-charge climate efforts. This support must be weighted to the regions which are most affected but currently getting least attention. Overall, we found that across both governments and foundations, air quality funding was concentrated in a handful of Asian countries, while in Africa, Latin America and the rest of Asia it lagged behind.

The opportunity is clear, but change won’t happen by itself. Because it lies behind so many other challenges, air pollution might seem like a secondary issue. This false perception is costing lives, hampering our climate efforts and hindering the effectiveness of our philanthropy. It should be central to the funding agenda, because it delivers positive impacts on so many fronts. We are here to help it get there, through COP27 and beyond.

Jane Burston is the Executive Director of the Clean Air Fund.